Born Rich is a 2003 documentary by Jamie Johnson, heir to the Johnson & Johnson fortune. In it, he interviews a number of other wealthy young people, and explores their taboos against discussions of money by doing the exact opposite: exposing intimate details of wealth in a documentary film. Ironically, he never gets a straight answer from anyone as to just why money is not to be discussed.

I think I've figured part of it out.

It came to me watching another of Johnson's documentaries, The One Percent. In one segment, Johnson talks to the director of an exclusive wealth management conference. The conference director estimates the average wealth of attendees at around $400M, with some in the billions.

Watching this scene, the thought occurred to me: what if you were a 400-millionaire at one of these conferences, sitting next to a family worth $10 billion? If this family invested their fortune conservatively in a broad basket of stocks and bonds, and followed the 4% rule, their investments would earn your entire life savings each year.

Imagine: would you really feel wealthy sitting next to someone who passively rakes in the fruits of your lifetime of business achievement plus inherited wealth every year with no effort? Such a person would belong to a whole different class of wealth, if such things were discussed in the open.

Of particular interest to us is what happens at the 14-decibel mark. This represents a 25-fold increase in wealth. If your wealth is 14 decibels larger than mine, you are in the lucky position that you could invest your wealth very conservatively and spin off my entire life savings each year using the 4% rule.

To set the zero-point of the decibel scale, I wanted someone at zero decibels to be "just barely wealthy" in some sense. I chose $500k for this. At this level, the 4% rule provides for $20k each year, which corresponds to Canada's "Low-Income Cut-Off" for one person living in an urban center. (Statscan goes to great lengths to point out that the LICO is not a poverty line, but I'm going to use it as such anyway. So sue me.) Below zero decibels, attempting to live on your wealth alone would mean living in poverty, and therefore you don't quality as wealthy (barring Early Retirement Extreme, of course). Above zero decibels, your wealth passively spins off enough income to keep you out of poverty.

Between the Forbes Billionaires list and the highly scientific and authoritative Celebrity Net Worth web site, I cobbled together a list of some notable people (mostly Canadian) and plotted their wealth in decibels: 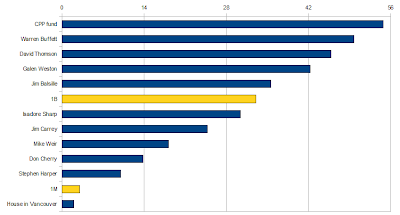 The vertical lines every 14 decibels divide these people into orders of "wealth magnitude", so you can tell at a glance that, for example, Warren Buffet's wealth could passively earn the entire fortune of Jim Balsillie each year. I think Isadore Sharp is pretty rich, but his entire fortune could be earned passively by David Thomson each year. And imagine Jim Carrey sitting down to have a chat with Stephen Harper, knowing that he passively earns Harper's total personal fortune each year.

This, I think, may be one of the reasons that the rich don't discuss their wealth, and it's a problem that middle-class peer groups never experience, because if one person's fortune can passively earn another's fortune each year, then at least one of those people is not in the middle class.

P.S. One other remarkable thing to note is that, by my definition of "wealthy", simply selling the average Vancouver house makes you instantly (barely) wealthy. The passive income from the price of a Vancouver house would be enough to keep you out of poverty without ever working again. This is what you give up to own a house in Vancouver. Houses in other large Canadian cities are just a few decibels behind.
Posted by Patrick at 11:48 PM

Interesting analysis. By your definition my decibel level is positive, but my family would not tolerate $20k/year. Also, I wouldn't be comfortable counting on the 4% rule as typically stated where it is an inflation-adjusted 4% of the starting wealth level. When I change 4% to 3% and change $20k/year to a much higher figure, I suddenly feel less wealthy.

Ultimately I picked the poverty-level income for a couple of reasons. First, it's at least somewhat objective: if your wealth can't lift you out of poverty, you're definitely not wealthy. I don't think I'd get any argument on that point. Second, even if you can't really support yourself on your wealth alone, by the time you're earning the LICO amount, that income is a substantial supplement to a middle-class income, and so it would (if spent) have a notable impact on one's standard of living.

All in all, $500k doesn't seem an unreasonable amount to declare someone to be crossing the threshold into the "wealthy" category.

@Michael: I should finish by saying this: please feel free to substitute your own criteria and see how it works out. If you'd like to earn the Canadian median household income using a 3% rule, for example, then your zero-decibel point would be around $2M, and you'd be more interested in 15-decibel differences rather than 14-decibel ones. Selling a house in Vancouver would leave you 5 decibels (which is a long way) from wealth.

It's not that I thought your post was wrong. I was just thinking about my "number" (the wealth that I'd feel comfortable retiring with). These things obviously vary from person to person. A single person at age 65 might feel comfortable with a LICO bump on top of CPP and old age payments. A younger person supporting 3 others needs more than LICO and is justified in being more nervous about 4%.

@Michael: Very true. In fact, to be fair to the LICO, it does vary depending on where you live and the number of people you support. Here is the chart for 2005, for example. My $20k figure is the LICO for a single person in a large city, or a rural family of 3. In your situation, the LICO would be more like $38k.

I chose the smallish $20k figure because I was aiming for a "poverty line" (which LICO is explicitly not designed to be).