The penalty for saving

Thicken My Wallet has a post on how the tax system discourages saving. In it, he mentions progressive taxes, the estate tax, and the high taxation of interest income among the reasons for this.

With all due respect, this seems to be a somewhat naive treatment of tax policy.
To me, what really penalizes saving is inflation. For some very loosely justified reasons, the central banks of the US and Canada aim for a 2% inflation rate. Deflation is deeply feared as some sort of bogeyman with scant explanation using terrifying terms such as "deflationary spiral" that call to mind the end of the financial system as we know it.

The fact is, before about 1900, deflation was commonplace in North America. Currency kept its average value over long periods because inflation and deflation alternated.

Targeting 2% inflation is just a 2% asset tax. It is analogous to a property tax, which would be fine, except for two very large problems:
If you want to encourage saving, how about a prolonged period of gradual deflation?

The problem, of course, is that there's no way for the government to achieve this. Our government lost control of the money supply in 1935 with the creation of the Bank Of Canada, at which point monetary policy could be relied upon to favour the banks. Banks love debt; inflation favours debt; hence we have nothing but inflation after 1935: 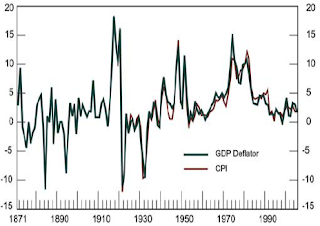 To really encourage saving over borrowing, the government would need to take back control of the money supply from the banks. Well, good luck with that.
Posted by Patrick at 7:26 AM

I love your post about inflation--it is a double edged swords, and like you I do not understand the need for it. Even with deflation our used items would devalue much faster because new items would be cheaper.

Frankly i wish inflation was a think of the past--it kills my Dividend investments. Sure I might have $50,000 in 20 years but it is only worth 20,000 dollars in today's money.

(Sorry for the double post--I wanted to change my username :P)

@Dd: thanks for the kind words. Sadly, if you look through this blog's history you'll see I don't post very often...

With well-anchored inflation expectations, real interest rates are independent of inflation. So, debtors pay 2% more for a loan in a 2% inflation environment than one with 0% inflation. Conversely, lenders get paid 2% more.

The inflation 'tax' is only felt by those who hold cash, or idle hordes. Stable, predictable inflation is otherwise priced in everywhere else.

5% deflation would be disasterous, as many people would not be willing to borrow money in that event. Loans must pay something more than 0% interest, otherwise the lender holds cash instead. 5% deflation plus interest gives a real rate of over 5% as the lowest possible interest rate on borrowing. Now look at our economy today. How much, as a percentage, of our borrowing happens at greater than 5% real rate? Very little. So, all of that borrowing wouldn't happen in that scenario.

@afransen: Thanks for your comment, but first of all, I still don't see the basis of your assertion that 5% would stop borrowing. Interest rates have been well above 5% many times in the past. Our economy thrives on credit, and a few percent deflation won't change that.

Second, what if borrowing did decrease? Would that be such a bad thing? It seems you can't go a day without hearing or reading someone bemoaning the amount of debt in our society.

Finally, there's no need to guess. Before 1935 deflation was a fairly regular occurrence, and was not particularly associated either with economic booms nor with hardships.

Inflation is just a euphemism for debasing the currency, and if we're doing that, I think it had better be for a good concrete reason.

5% real rate for risk-free borrowing would be 7% Government of Canada bonds in today's environment. The big banks would borrow at something like 8.5 - 9% nominal rate (7-ish% real), and lend back out somewhere around 10% real rate of interest to their best clients. People wouldn't be able to borrow to own their own home, start a business, etc. Consumption and investment would fall as people earned a higher rate of return by hording cash.

This is a recipe for economic collapse. The economic collapse would increase the rate of deflation in a self-reinforcing cycle. This is why they call it a deflationary spiral, and it would be very bad for people.

@afransen: Mortgage rates were well into the double-digits as recently as the 1980s. Were there widespread foreclosures? Was there a mass exodus from real estate? On the contrary, real estate pries peaked in 1989.

If deflation wreaks havoc on an economy, how do you explain Canada's survival of the deflationary periods so commonplace before 1935?

I've heard enough unsupported assertions about the devastating effects of deflation to last me a lifetime. I'm willing to believe deflation is harmful, but I have yet to see any evidence, so if you have some, I'd love to see it.

When interest rates were high, so too were inflation rates. The real rate of interest was much lower. You seem to be confusing the two.

5% deflation plus a risk premium of 1.5% over the risk-free nominal interest rate of 0% gives a real interest rate of 6.5%. That would be a lot heavier burden to carry than the situation in 1980. It would be like paying 8 or 9% for a 1 year mortgage today versus the current 2.5-3%. Do you disagree with any of this, or that such an interest rate would be detrimental to the economy?

@afransen: It would be easier to agree with your assertions if you'd provide some links to some evidence.

But I guess that's beside the point. I wouldn't say I "disagree" that it would be detrimental, but that I'm skeptical and doubtful. I'm prepared to be convinced otherwise.

People and businesses routinely carry balances on credit cards with 20%+ interest rates, and life goes on. I'm not convinced that real interest rates of 8-9% would cause everyone to start keeping cash under their mattresses.